We had our annual tailgate on Sunday, November 14, 2021 before the Packers/Seahawks game. The weather was a little cool but everyone’s smiles were warm. As always, Jay and his staff at the Franklin Family Entertainment Center provided great food. We were also joined by former Packers defensive back David Hathcock who played for Vince Lombardi’s Superbowl I winning team. Best of all, we ended the day with a win over the Seahawks.

Here are some photographic memories from the day.

Let’s put COVID-19 behind us, like a Bears cornerback trying to cover Davante Adams, and get back to what we love—cheering the Packers to victory at the Nashville Packer Backers Club!

The Packers Club is returning to normal. Seating is at regular capacity general admission (not reserved). Just show up and grab any open seat, like before. Everyone is welcome.

We will be doing pushups with the kids and awarding prizes again too, so come and join us for the fun starting Saturday August 14th for our first preseason game against the Houston Texans.

Memberships are returning to normal too. Everyone is welcome to join us for games—you don’t have to be a member to attend—but if you choose to join, membership is $20 for the year. Members get this year’s new t-shirt, a meal at our tailgate party and a Nashville Packer Backers window cling for your car.

Want to join? Come and see us for a game and we’ll show you how.

Mark your calendar. This year’s tailgate party is scheduled for November 14 before our game with the Seattle Seahawks. We’ll eat and party in the parking lot from 1:30-3:30 and then go inside and watch the game. Members eat free from the buffet. Guests can eat for a small fee.

Who says preseason games don’t count? They do to us. If the Packers are playing, then we’re cheering. That’s why we’ll gather for every preseason game, starting August 14 for Packers/Texans.

We’ll see you at the club. Go Pack Go Y’all!

Not everyone feels comfortable joining us at the club this year, so we thought we’d bring this year’s shirt to you!

We’ve opened an online store where you can order shirts and have them shipped directly to you. The design cheers on our Packers while making a comment on the crazy year that is 2020. So, get one for yourself and do some Christmas shopping for the Cheeseheads in your life.

Don’t delay. This store is only open until October 16th. Then we’ll close it, print your shirts and ship them directly to you. 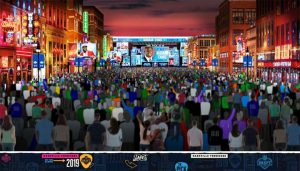 See how the Nashville Packer Backers train during the off-season.

The Green Bay Packers have recognized The Nashville 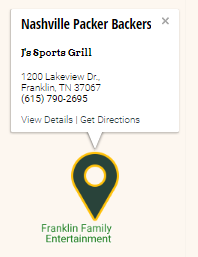 Packer Backers as an official Packers Fan Club with a listing in the club directory at www.packerseverywhere.com.

The listing includes our address, phone number, a map showing our location, a photo of the club on game day and a description.  It also links them to our website for more information.